I believe Liz Lemon once said “Love is patient, love is kind. Love is gross, and sometimes weird.” I say that love is watching my boyfriend eat a slice of pecan pie before letting him kiss me. Love is letting him kiss me even though we both know that I have an allergy to nuts. Love is asking my boyfriend – as a joke –  as my face breaks out in hives, if I’m still pretty. Love is having him say “Yeah sure, but don’t you need some kind of medication.” Luckily my allergy is not that severe.

I say that love is flying halfway around the world to visit Gabe while he’s studying abroad in Singapore, because he’s feeling homesick. And even though I haven’t gone anywhere, since he’s been gone, I’ve been feeling kinda homesick too. So I embark on a 14 hour flight across the Pacific, leaving dreary Wisconsin weather behind in favor of the heat of a city 60 miles north of the equator. The travel is long and confining and I’m totally alone, and immigration won’t allow me into the country the first two times I get in line, but all of my fears subside as soon as I see him there to pick me up at the airport. Sort of.  I mean, it’s been a couple months, but it’s like nothing has changed. Well, it’s a little weird. I’ve forgotten some of our more obscure inside jokes and he’s trying to get used to me grumpy and jet lagged and a little on edge. Still, he wants to show me around the city and we agree to go on a dinner date to a local restaurant.

Now, maybe it’s the thrill of vacation, or maybe it’s because I want to look nice for a dinner date with Gabe, or maybe it’s just the desire to feel sun on my body, but I put on a white and blue flowy dress, do my hair, and put on makeup. I embrace the chance to slip into some of the femininity that I rarely seem to have time for at home. Why not? I’m on vacation.

Before the sun sets, we go to an Indian restaurant that Gabe says is a local favorite. The only other Indian restaurant I’d been to was back at Madison, but Gabe tells me that the tikka masala is favorite dish. When it arrives at our table I can why. The food is bright red from all of the delicious spices, disguising whole chunks of tender, perfectly cooked chicken. I abandon my ladylike manners for just a moment in order to fill my mouth with each savory bite. For a moment, everything is wonderful. The spices make my lips tingle. My stomach almost hurts, it’s so good….

Wait. Actually, it just hurts. Really bad. I slow down my eating pace and Gabe, noticing something is wrong, asks if I’m okay. “I don’t think so,” I say. “Do you think food poisoning can act so quickly?” He says it can’t and I’m probably just imagining things. But the hurt doesn’t go away. It’s getting worse. I decide I can’t stay in one place any longer, I need fresh air. We quickly pay for our meal and make our way down the sidewalk. I feel sicker and sicker and Gabe is just being so attentive and patient; he’s a comforting presence.

“I think it’s heartburn,” I say. “I don’t think I’ll throw up.” He tells me we can get an antacid from the corner pharmacy. We get a box of chewable antacids, which, I believe, should not have been marked chewable. They tasted awful. Like cardboard soap. It was enough to make anyone gag.

But before I can fully get the words out, up comes the bright red, chicken chunky, apparently cashew-filled tikka masala, spilling over onto my white dress faster than I can even perceive what is happening. And not quite as fast, but still surprisingly quick, Gabe throws his hands forward in order to try and catch the disgusting, pukey mess that I’m currently spewing at an alarming rate. He didn’t even hesitate. And as all of my efforts to look feminine fell away, my stained dress and my smeared makeup, there was just me and Gabe and my puke. The trifecta of true love.

Love is like that tikka masala. Love is spicy and red and chunky. And right now, my love is currently being held in a pool in Gabe’s hands. Love is gross. 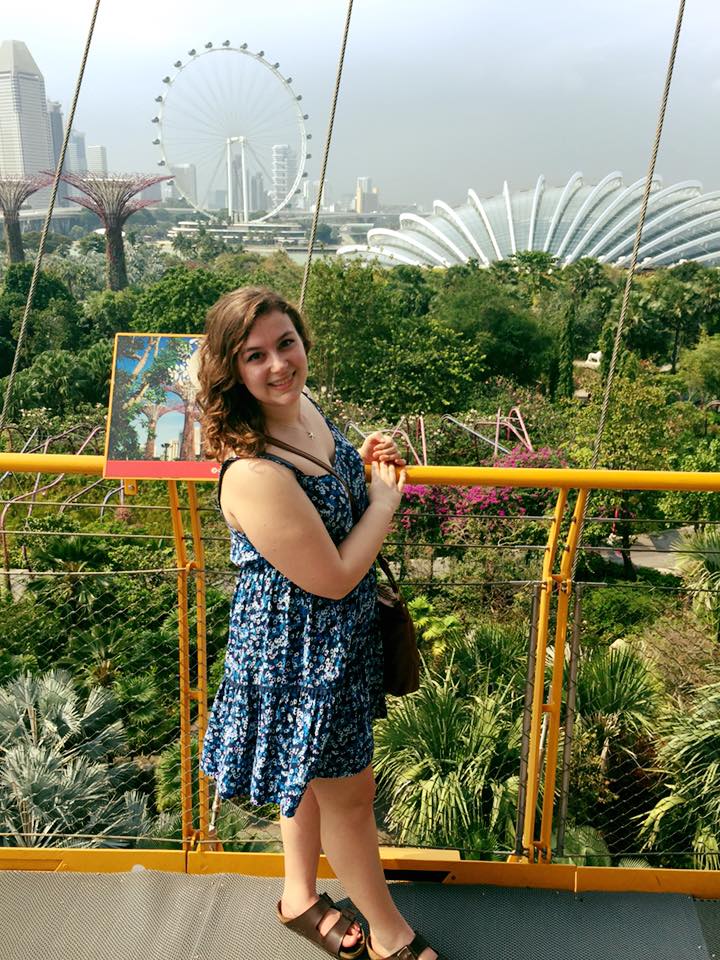